Peraton Employees on the Frontline of the Mars 2020 Mission 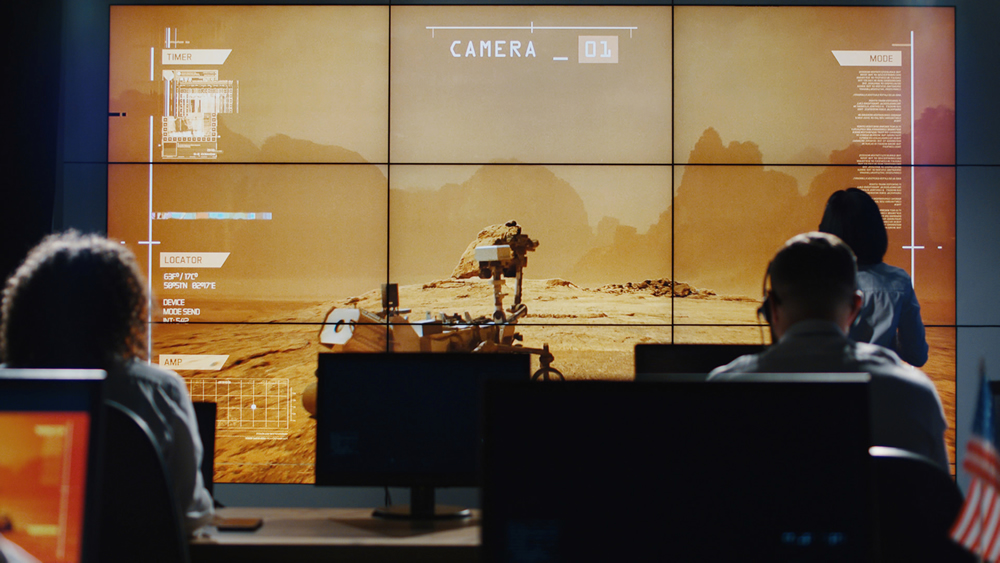 There are few goals loftier than a journey to Mars. Behind every grand vision are the individuals who have worked for years to ensure that the mission is executed successfully. For NASA’s July 30 launch of the Atlas V rocket that sent the Mars 2020 spacecraft and Perseverance rover on their way to Mars, there were many Peraton employees whose work has and will continue to be critical for the success of the mission.

Given the importance of uninterrupted communications with Earth until the Perseverance rover is delivered to the Martian surface in February 2021, NASA needed a radar transparent heat shield for the spacecraft’s antennas to make sure the thermal substance would not block radio frequency (RF) signals. Peraton’s proprietary Acusil® material has those features needed for mission success.

Matt K., Lead Materials and Process Engineer, packed the putty-like substance onto the parachute closeout cone and backshell interface plate with his own gloved hands. Matt then laid out composite blankets to establish an Out of Oven (OOO) composite cure due to the size of the Mars 2020 vehicle parts. The baking process cures, or hardens, the Acusil so that there are no seams. Following cure, the parts were sent to Peraton’s internal machine shop, led by Kyle F., who machined them to make the final dimensional checks. These parts were sent over to Peraton’s Quality Department for NASA’s Jet Propulsion Laboratory (JPL) Clean Level II inspection.

Matt and his team understood the high stakes involved for Mars 2020, so they started preparation in early 2017. There is a long supply chain for the components of the Acusil recipe, so the team could not afford to make mistakes because few spare materials are available. The team first conducted routine checks on the material to ensure it met density requirements, then supported rounds of thermal analysis and stress tests to make sure the entry, descent, and landing (EDL) onto the Mars surface would not damage the rover or tear its parachute.

“We will be watching intently during the re-entry in February,” said Matt. “It’s a little terrifying how much is on the line.”

Most of the work put in by the NASA Space Network (SN) happened prior to the mission’s start. The SN consists of a constellation of ten Tracking and Data Relay Satellites (TDRS) and their corresponding ground systems in New Mexico and Guam.

Peraton White Sands Complex (WSC) Technical Operations and Analysis manager Cameron D. oversaw a series of tests to verify that the ground equipment would be ready to communicate with the Atlas V launch vehicle. Cameron’s team handled real-time support for the Atlas V, so they began preparation for the Mars 2020 mission about a month ahead of time. “Every launch, no matter how similar it is to one we’ve done before, requires detailed analysis to select the proper TDRS and its corresponding ground antenna,” said Cameron.

The hours before launch was crunch time for the Space Network. “We provided hands-on support from the SN operation consoles starting at the pad up through separation,” said Cameron. During the launch, members of the SN operations crew monitored TDRS spacecraft telemetry and ground equipment performance and were on standby to troubleshoot any drops in communication with the rocket. An hour and a half after launch, the booster rocket separated from the spacecraft and no longer communicated with the SN.

“From the standpoint of the SN, the launch was very successful and speaks to all the work that was performed up front by the team,” said Cameron. “I’m really proud to be a part of the next step to getting humans on Mars.”

“To make launch day a success, we have to imagine every possible scenario that no one else has thought of,” said Tom H., Peraton’s Deep Space Network (DSN) network engineering manager. “What is the surprising element that can make or break the whole mission?”

Answering that question required Tom and his team of 40 engineers to conduct practice runs and functionality testing. Since the Deep Space Network is the only way spacecraft anywhere beyond the Moon can send information back to Earth, there was a lot of pressure to make sure nothing goes wrong—if communication fails at any point, the mission ceases.

Two years prior to launch, Tom’s team was calculating the signal power and telemetry rates throughout the spacecraft’s trajectory to Mars to make sure the DSN would always be able to locate and communicate with it. They checked basic radio functionality, threshold testing to measure the data rate of the signal, link budget tests to make sure the radio frequency syncs up, and transponder coherency tests, which is how the DSN gets a strong signal.

Peraton’s DSN mission planning manager, David J., oversees about 30 engineers who run the remote console during launches, manage the communications schedule for 40 different spacecraft to make sure each of their signals gets received, configure the network to receive downlinks from spacecraft, and configure the ground base segment to transmit uplinks to spacecraft.

“Launches are never successful by accident,” said David. “They take a lot of effort and hard work. They’re complex, risky, and high stress.”

Each spacecraft requires unique signals and the transmitter uses different frequencies to communicate with each one. Launch days are of the highest priority, so they are labelled a Level 1 event. When the Mars 2020 spacecraft approaches the Martian atmosphere, known as the “initial acquisition,” that will also be a Level 1 event. Level 4 events are daily, routine communications, which will occur on the average day of the Mars 2020 mission until the Perseverance rover stops functioning. “Everyone gets a slice of time,” said David. “We can’t communicate with all forty spacecraft that are flying beyond the Moon all at the same time. It’s a dance done in concert with NASA’s Jet Propulsion Laboratory.”

To check their calculations for communicating with the radio aboard the spacecraft, David’s team conducted several rounds of compatibility tests over the last two years. “We try to practice, but we don’t have the exact data until the spacecraft is up in orbit for real,” explained David. His team ran ground data system tests in which they injected simulated data that mimics the DSN. They made sure the telemetry could be received through transponder compatibility tests. Since April, they have conducted mission event readiness reviews with NASA to share critical event planning analysis and the results of their rigorous testing.

“It is so exciting when a rocket goes off the launchpad and in an hour, it is up to you to keep the mission going—no one else,” said David. “Two years’ worth of work will show itself in an instant.”

Peraton is grateful to these hands-on employees working with our customers on the frontline of the mission, supporting NASA in its efforts to pursue astrobiological exploration and keep the flame of adventure alive. To learn more about Peraton’s involvement support for NASA and the Mars 2020 mission, visit peraton.com/mars.

Peraton Raising the Bar with New Cross Domain Solution in 2021

Can There Be Life on Mars?
Scroll to top